It was March 2011. Brian Swette was chairman of Burger King. His wife Kelly Swette (pronounced “Sweetie”) was head of global marketing for PepsiCo. Their jobs encompassed selling and marketing meat and soda.

Then, one day, they woke up and said, “I want to lead a meat-free life and create meat-free products.”

So, they began playing with recipes out of their home kitchen. Their dining room served as the global headquarters. They had just 6 employees.

And, in 2012, Brian and Kelly purchased the Sweet Earth name from a local store in Pacific Grove, Calif., pooled $5 million of their own money and launched Sweet Earth Natural Foods with a 38,000-square-foot plant in Moss Landing, Calif.

Read about the plant here.

“We always wanted to do something local in the community, something along the notion of creating jobs and industry for the local community,” says Brian, president and co-founder. “We came into this business with the belief that we could make a better product.”

That better product consists of 48 SKUs of frozen meals, burritos, breakfast sandwiches and chilled plant-based burgers that are packed with protein, fiber and whole grains, boast vibrant colors, interesting textures and savory flavors and are available in more than 10,000 stores, including Whole Foods, Target, Walmart and Kroger nationwide.

Here’s why Sweet Earth, recipient of Refrigerated & Frozen Foods’ 2018 Frozen Foods Processor of the Year award, is the catalyst for change in the plant-based frozen foods space. 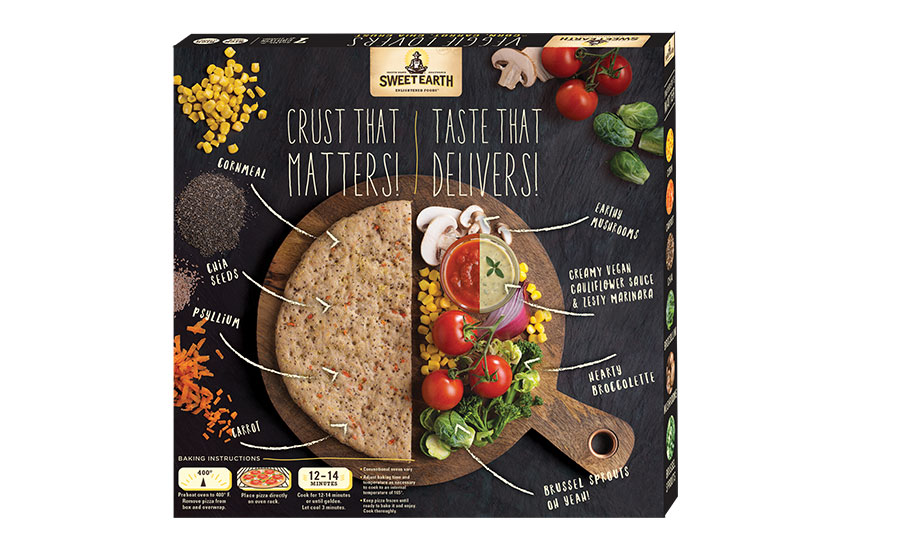 Every Sweet Earth package tells a story and highlights such ingredients as corn, squash and beans, among others.

What grows together, goes together

While the plant-based “trend” continues to transform the food and beverage industry, Sweet Earth only produces items that have a story to tell. And, those stories are spelled out on the sides and backs of the packaging, highlighting such ingredients as corn, squash and beans, among others.

“We believe that ingredients matter,” adds Kelly. “You can see that the food is front and center. And, the food in the package looks like the food on the cover. We make a real effort to make sure that happens. But, then we also needed to create a logo that communicated our sensibility. And, that character we call the Zen Farmer. He represents our harmony with the Earth and nature, which really supports our sustainability mission. The black is the antithesis of all the white hospital food that was the frozen foods aisle. We are part of the modern food movement.”

Crust also matters, which is why Sweet Earth developed what it calls Pizza Enlightenment, and is part of what spurred the name change to Sweet Earth Enlightened Foods.

“Fifty percent of the pizza is crust, so why should the crust be a throw away? We believe it’s an opportunity for not only great flavor, but also great nutrition. In the Veggie Lovers pizza, for instance, on the bottom, you have chunks of carrot, you have chia, you have cornmeal and you have a really nice, soft texture. And, you also have 5 grams of fiber in this crust,” says Kelly. 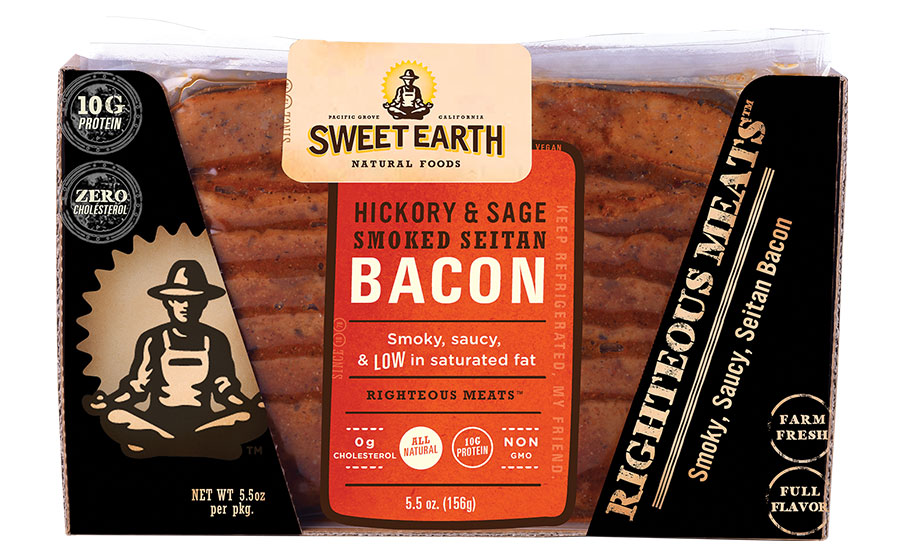 Sweet Earth’s Moss Landing site is also home to an 8,000-square-foot garden, which is used for culinary events, employee lunchbreaks and for chefs to incorporate fresh ingredients in future new product developments.

The garden is complete with nasturtiums, mint, cilantro, lemon, lime, artichoke, Brussel sprouts, every variety of kale, chives, fennel, rhubarb, lavender, strawberries, mushrooms, onions, broccoli, parsley, oregano, thyme, all kinds of ornamental lettuces and greens, three varieties of apples and a wide selection of tomatoes. Additionally, each bed is equipped with its own irrigation system, and the perimeter of the garden boasts electricity boxes for outdoor eating in the evening.

“I’m in the belief that people who work with food need to understand the food and the ingredients, and an important part of that is having to grow the food,” says Kelly. 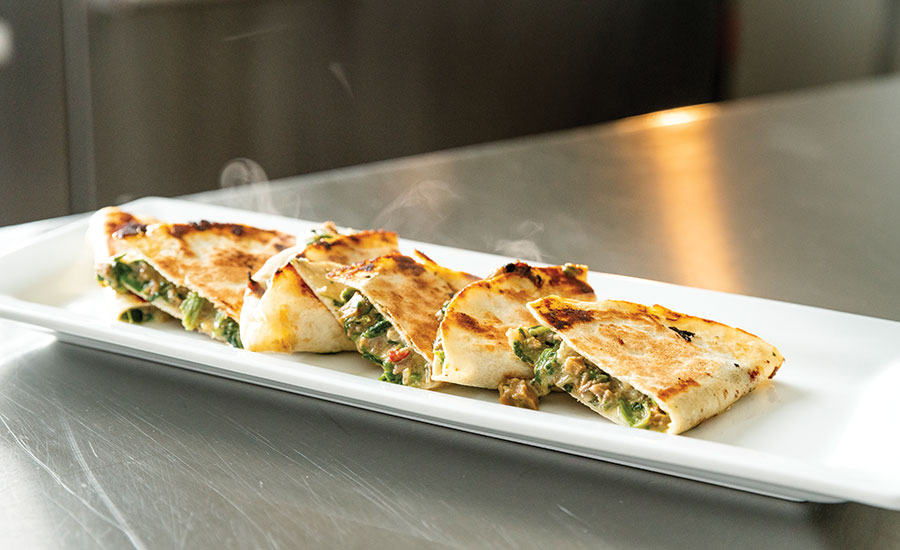 Sweet Earth is considered to be “the end product of all of our opportunities in corporate America,” says Kelly. “It’s where we could take something we truly believe in, which is creating a more sustainable food system, and bring it more mainstream.”

That’s why Brian and Kelly co-founded the Swette Center for Sustainable Food Systems, housed in the School of Sustainability at Arizona State University, Tempe, Ariz. The center, which opened doors in January, tackles food systems such as water and energy use, carbon footprint and nutrition and efficiency across the global supply chain, all from a holistic standpoint. 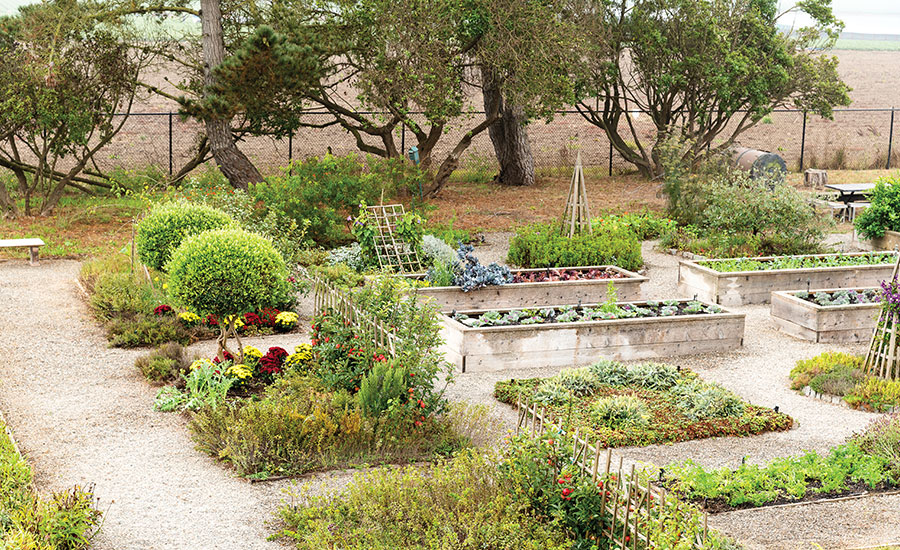 “Part of our mission is that we encourage a curious mind and palate. When you become curious, when you become educated, you make better choices. With knowledge comes that,” says Brian. “The other thing is that we believe in tradition and nutritional truths to honor the past.” 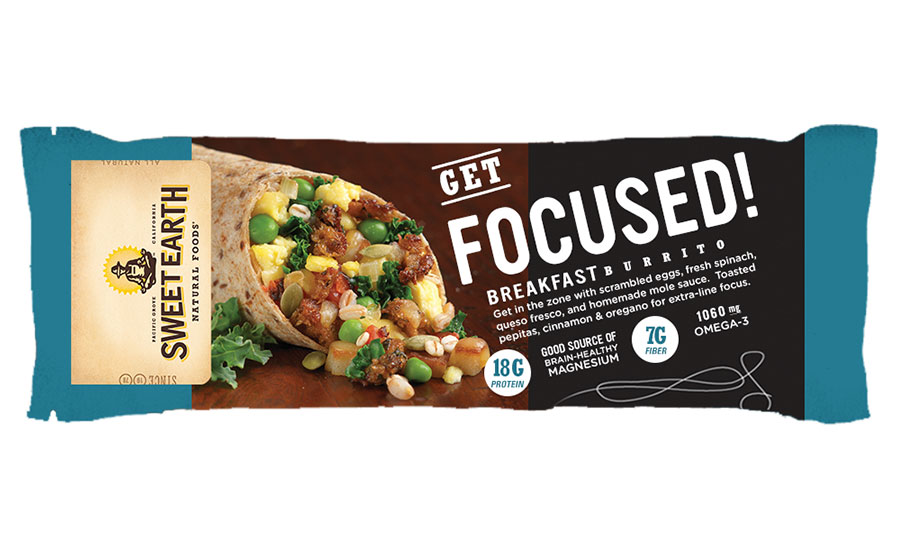 Sweet Earth's tortilla-to-fill ratio is said to be the highest in the industry.

“Since inception, we have believed in being flavor forward, meaning we believe that most of the food that was sold in the plant-based space was bland. It lacked flavor interest. It had no story. Flavor forward is more of the way that we think young people like to eat today. And, more people in general are interested in spicy, more flavorful foods,” says Kelly. “The second thing is nutrient dense. While there’s this incredible focus on getting more protein in the diet, that we actually need more ingredients of nutritional deficiency. Like fiber. Like magnesium. Different vitamins that we could only get from these colorful fruits and vegetables.”

Going forward, Sweet Earth will continue to invent and push the bar on new and innovative foods.

“We believe there’s more to be done in the plant-based food movement in developing a more sustainable future,” says Kelly. “And, we’re going to do our part to be influential within the Nestlé organization.”